Below are samples for wedding anniversary gifts.

45th Anniversary gift for my parents

Our parents loved their 45th Anniversary gift of their wedding photo. Thank you for helping us give them such a special present.
Laura Phillips, Kentucky 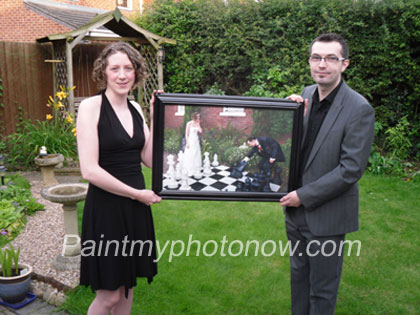 The picture was a gift for my wife for our 2nd wedding anniversary. She and everyone else was blown away with how good the picture looks - including our wedding photographer! It took my wife by surprise when she saw it, as her first thought was that it was a framed photograph. The detail on the picture is immaculate and we have been hunting through our photos to see which image we would like to get done next!!
Anthony Booth, Derbyshire